By Stuart ClarkMay 5, 2020No Comments

Its anniversary, its origins, its benefits and its limits 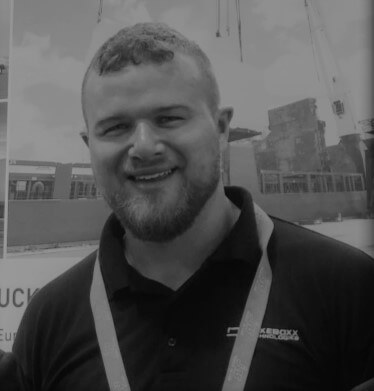 26 April was the 64th anniversary of container shipping as we know it. With that said, we should not forget that containerization can trace its influences and origins far further back than six short decades. Railroads in different parts of the world were carrying timber boxes that could be transferred between modes of transport even by the first half of the 19th century, and the Bureau International des Containers, who control global registration and protection of container ‘BIC codes’ today (and featured CakeBoxx Technologies in one of its recent publications), was actually established and began developing the first container standards from 1933 – some 23 years before the aforementioned anniversary date. In between these dates, the US Army also pioneered stackable steel boxes that influenced the shipping containers we know today.

However, the 26th of April 1956 is the date that really sparked the global commercial containerization revolution, which in turn, spawned the global supply chain economy we all recognize today. That was the day former trucking magnate Malcom McLean put 58 containers, that he developed with engineer Keith Tantlinger, on the SS Ideal-X and successfully shipped them from Port Newark to the Port of Houston.

After commercial container shipping was first initiated, it predictably took a few years to catch on as the industry standard. Interestingly, one of the great benefits initially identified in the intermodal container’s history, which helped facilitate its acceptance, was added cargo security. I’ve always found this fact fascinating. Shipping cargo in a big, sealed steel box seemed a much more attractive prospect than it being loosely stowed in a ship’s hold or on deck where it provided a rogue’s gallery of merchant mariners in any number of countries open access to “sample” the cargo en-route to its destination.

On the timeline of maritime trade, the idea of standard containers being secure is extremely recent, though to us at CakeBoxx Technologies, it seems like ancient history. Most shipping containers are largely the same as they were when designed back in the 40s and 50s, whereas times have changed so significantly in this modern era of international trade. Adoption of intermodal containers as the standard for shipping the great majority of cargos globally has led to huge security issues. Criminals have had more than half a century to find ever more ingenious ways to exploit the easily defeated doors, seals, and locks on containers, to either steal goods or much more worryingly, to hide illicit cargo in one box among thousands. Last year, in just one week, we saw three significant seizures of very large quantities of drugs found in containers, which had devastating consequences for the shippers and carriers. But so many more illicit moves are not prevented, and often can’t be unless the container is first somehow identified as suspect and secondly, be completely destuffed – an arduous process which could never be adopted for every shipment given the velocity demanded of today’s supply chains.

Garry Whyte, the late inventor of the first CakeBoxx two-piece ‘doorless’ container saw this and started a new revolution in the early 2000s.

The threat of container exploitation is ever-growing and no standard containers are immune. Our doorless CakeBoxx models have no point of access to the cargo without using equipment to lift the lid, leaving no way for criminals to get in while these containers are in transit or in a stack. This huge security (anti-terrorism) benefit was recognized by the US Department of Homeland Security when they designated  doorless CakeBoxx containers as Qualified Anti-Terrorism Technology in 2018 – still the only intermodal container with this designation. Even CakeBoxx models with a requirement for doors can be tamper-proofed by locking them from the inside before the lid is sealed – making the doors far more difficult to compromise.

The two-piece design of CakeBoxx containers has an efficiency and safety benefit as well. The lid can be opened by customs officials and searched very quickly and safely with full 360-degree access and top view of all cargo, eliminating the time required to unstuff and re-stuff a standard container through its doors.  This feature also eliminates two opportunities for damaging the cargo during the unstuff and restuff processes.

Security concerns with the global container system have been bubbling unhappily beneath the surface for decades. Fundamentally, they still boil down to the physical security attributes of standard container doors. While some stronger measures have been taken in response to terrorist and criminal activities (really just process controls, container tracking and e-seals), standard containers and container doors remain unchanged since Malcolm McLean loaded his first containers onto SS Ideal-X sixty-four years ago.  Technologies like the two-piece doorless CakeBoxx, with strong, practical, physical security attributes are more important now than ever before.

We find ourselves in the middle of the most significant global pandemic in over a century and the most widespread crisis since the Second World War. The measures being taken now to ensure the efficacy and safety and security of supply chains are unprecedented and valiant,  but few will agree it is enough.  Global transportation systems will have to transform to address vulnerabilities exposed by the coronavirus response.

We are all stakeholders in the medical supply chain.  Here at CakeBoxx Technologies we want to help and are standing by to:

PUT A LID ON IT

10 Ways of Excelling During a Crisis